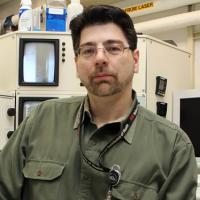 Dr. Dragan Maric received B.S. degrees in biochemistry and microbiology in 1981 from University of Maryland, and a M.S. in immunology in 1985 and a Ph.D. in neuroimmunology in 1989 from University of Belgrade, Yugoslavia. Dr. Maric completed his postdoctoral training in developmental neurobiology at NINDS from 1991-1993 and in mucosal immunology at McMaster University, Hamilton, Canada from 1993-1994. After returning to NINDS in 1994, Dr. Maric worked in the Laboratory of Neurophysiology first as a visiting scientist from 1994-2000 and then as a staff scientist from 2000-2010. He became Manager of the NINDS Flow and Imaging Cytometry Core Facility in 2001.

These studies also involve the longitudinal assessment of in vivo survival, differentiation and integration of FACS-sorted embryonic NSCs after implantation of these cells into the rodent brains following ischemic and traumatic brain injuries. He is also developing state-of-the-art multiplex fluorescence immunohistochemistry biomarker screening methods utilizing unique combinations up to 100 biomarkers relevant to comprehensively study the complex processes brain tissue remodeling and recovery in response to different types of insults (including rodent models of stroke as illustrated in the image below) and other neurodegenerative disorders in the CNS.

The section was simultaneously probed with 12 different fluorescent biomarkers relevant to neuroinflammation, neuronal plasticity, neurogenesis, gliogenesis and angiogenesis and each biomarker imaged in a separate fluorescence channel using multi-spectral wide field fluorescence microscopy. The images were then merged into a 12-color fluorescence composite to illustrate the concurrent processes of brain tissue damage and repair in response to focal ischemia. The above methodology exemplifies a comprehensive multiplex biomarker screening approach to study complex systems biology in the brain under normal and pathological conditions assayed at single cell level of spatial resolution.