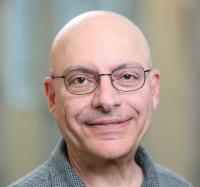 Simon Halegoua, Ph.D., joined NINDS as a Senior Advisor to the Scientific Director in February 2019. He was awarded a B.S. degree in Biochemistry at Stony Brook University in 1974 and continued on to receive a Ph.D. in Molecular Biology in 1978. He was a postdoctoral fellow in Molecular Neurobiology at the Salk Institute from 1978 to 1982. In 1982, he joined the faculty of the Department of Neurobiology & Behavior at Stony Brook University as Assistant Professor and was promoted to Associate Professor with tenure in 1988, and then a Full Professor in 1994. He served as Interim Chair of the Department from 2006-2008. Professor Halegoua has served as the Director of the Center for Nervous System Disorders since 2002. He has been the PI of extramural RO1s and PO1s from the NINDS and has served on the Editorial Boards of the Journal of Neuroscience and the Journal of Biological Chemistry.

The survival and function of neurons are controlled by families of neuronal growth factors, which send retrograde signals across the synapse and up the axon, to reach the cell nucleus in the soma. The best-studied family of neuronal growth factors is the Neurotrophins (NTs), including the prototypic Nerve Growth Factor (NGF). The NTs control neuronal phenotype including axon growth, the cell cycle, neurotransmitter metabolism, electrophysiological characteristics and synaptic strength. Signaling from the NT receptor, Trk, involves the integration of multiple signaling cascades that culminate in post-translational control of protein function, as well as translational and transcriptional controls of gene expression.

A central question for NT signaling lies in the differential signaling capabilities over time and space. Signaling is mediated by NT acting over seconds vs. minutes or hours and biochemical signals are propagated from the nerve terminal over long axonal distances to the soma. We first proposed a now well-accepted model for this signaling via endosomal vesicles containing NT and Trk. We identified the first molecular component, Pincher, for forming and trafficking these signaling endosomes. We are working to determine the underlying mechanisms for long distance, sustained endosomal signaling and its role in mediating NT actions using degeneration and nociception paradigms.