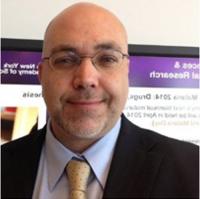 His doctoral thesis work focused on modeling genomic profiles collected from blood for Stroke diagnosis while his elective work focused on identifying the molecular effects of Anthrax on Lung, Liver, and Kidney.

In addition to providing analysis support, he also serves the Institute as a mentor in the summer internship program each year; teaching visiting students how to perform different types of bioinformatics analyses. Former positions held by Dr. Johnson, include those at the National Cancer Institute (1994-1995), Human Genome Sciences Inc. (1995-1996), and Gene Logic, Inc. (1996-2006). Notable accomplishments to date include the co-founding of Gene Logic, the co-pioneering of predictive toxicogenomics, and the co-development of the NIH Stem Cell Data Management System. As evidence of these accomplishments and evidence of his experience, Dr. Johnson has 5 patents in the field of predictive toxicogenomics, 1 patent in the field of stroke diagnosis, and has multiple works published in nearly 50 different Journals.

In recognition of his accomplishments and experience, Dr. Johnson has received the NINDS Distinguished Performance Achievement Award six times and the NINDS Merit Award for Excellence three times. Part-time, Dr. Johnson teaches graduate-level Bioinformatics as an Adjunct Professor for the University of Maryland (2009-Present) as well as teaches Bioinformatics for the Foundation for Advanced Education in the Sciences (FAES) at NIH (2014-Present). In 2011 and 2012, Dr. Johnson was nominated for the the Stanley J. Drazek Award for Teaching Excellence.