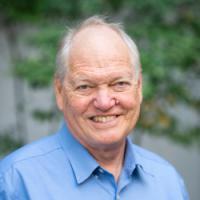 Dr. Nelson received his B.A. in Biophysics from Amherst College and his Ph. D. in Biophysics from Johns Hopkins University. At Johns Hopkins, under the preceptorship of John Dowling, he studied conductance mechanisms responsible for light responses of retinal bipolar cells. In his postdoctoral studies at the National Institutes of Health he formed a close collaboration with Helga Kolb in pioneering a type of study in which the light responses of retinal neurons were tightly interpreted in terms of synaptic connectivity. Dr. Nelson's laboratory is currently investigating the neural circuitry for image processing in zebrafish retina.

One of the more spectacular feats of nerve cells is extracting information from light. The retina is a light sensitive neural tissue at the back of the eye that performs this task. The retina is composed of a network of nerve cells which receive, process and transform visual information. Visual information is transduced by photoreceptors and processed by numerous retinal interneurons before transmission through optic nerve fibers to brain visual centers. During periods of dim illumination specialized bipolar and amacrine cells selectively process signals from rod photoreceptors. There are other bipolar and amacrine cells which process signals from cone photoreceptors when the visual scene is brightly illuminated. Some neurons are excited by bright contours (ON-center bipolar and ganglion cells). Others are excited by dark contours (OFF-center bipolar and ganglion cells). The goal of studies in the Neural Circuitry Unit is to define systems of neurons devoted to selective visual tasks, and to identify the synaptic mechanisms they employ. Drs. Kolb, Fernandez, and Nelson edit 'WEBVISION', an online tutorial on retinal neural circuitry and function.

The zebrafish model has recently been employed in studies of color vision circuitry. Retinal horizontal cells, which are directly post-synaptic to cones, integrate signals from red, green, blue and UV cones. They are capable of complex spectral responses including ultraviolet sensitive types with color opponency. A tetraphasic wavelength response and intracellular stains of horizontal cells are seen in the figures below.