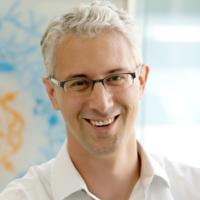 Dr. Ward received his B.S. from Kenyon College in 1999 and M.D. and Ph.D. degrees from Washington University in St. Louis in 2007. As a graduate student, he worked in Yi Rao’s lab and studied the regulation of cell migration during neurodevelopment. Following a neurology residency at the University of California in San Francisco, he sub-specialized in behavioral neurology and completed a postdoctoral fellowship in Li Gan’s lab studying basic mechanisms of frontotemporal dementia (FTD). As a fellow he received an American Brain Foundation CRTF award and a NIH K08 career development award. In 2015 he joined the NINDS as an Assistant Clinical Investigator, and became an Investigator in 2017. Using human induced pluripotent stem cells (iPSC)s as a cellular model, his research group focuses on identifying intersecting mechanisms of neurodegenerative diseases, with an ultimate goal of developing targeted, disease-modifying therapies for affected patients. In addition to his research efforts, he sees patients with neurodegenerative disorders in the NIH Clinical Center, and co-directs the iPSC Neurodegenerative Research Initiative (iNDI), a large-scale effort to generate and phenotype iPSC models of Alzheimer's disease and related dementias.

Our research focuses on cellular and molecular mechanisms of frontotemporal dementia (FTD) and Amyotrophic Lateral Sclerosis (ALS), two related neurodegenerative disorders. We use a combination of cell biology, proteomic, and functional genomic approaches in iPSC neuron models of ALS/FTD, with a long-term goal of understanding how disease-associated familial mutations lead to neurodegeneration. Our group has made several major contributions to the field over the past several years: 1) New tools that enable large-scale production of human iPSC-derived neurons and genome-wide CRISPRi screens, and conception and management of a large-scale genome engineering iPSC initiative (iNDI). 2) Discovery of a new mechanism of axonal RNA transport in neurons that involves lysosomal hitchhiking, a process that goes awry in familial ALS. 3) Characterization of dysregulated splicing in ALS/FTD due to mislocalization of TDP-43, uncovering novel disease-relevant splicing targets and potential biomarkers. 4) Discovery of widespread DNA break/repair events at neuronal enhancers that are likely necessary for epigenetic regulation. Each of these efforts have been highly collaborative in nature, involving multiple teams from independent institutions.