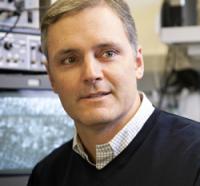 Dr. Diamond received his B.S. from Duke University in 1989 and his Ph.D. from the University of California, San Francisco in 1994, where he studied excitatory synaptic transmission in the retina with David Copenhagen. During a postdoctoral fellowship with Craig Jahr at the Vollum Institute, he investigated the effects of glutamate transporters on excitatory synaptic transmission in the hippocampus. Dr. Diamond joined NINDS as an investigator in 1999, was awarded the Presidential Early Career Award in Science and Engineering in 2000 and was promoted to Senior Investigator in 2007. His laboratory studies how synapses, neurons and small circuits perform computational tasks required for visual information processing in the mammalian retina.

Our laboratory seeks to understand how neural circuits receive, compute, encode and transmit information. More specifically, we’d like to learn what biophysical and morphological features equip synapses, neurons and networks to perform these tasks. The retina is a wonderful model system for the study of neuronal information processing: We can deliver precisely defined physiological stimuli and record responses from many different cell types at various points within the network; in addition, retinal circuitry is particularly well understood, enabling us to interpret more directly the impact of synaptic and cellular mechanisms on circuit function. We have exploited these advantages to examine how synapses and neurons within retinal circuits perform specific visual computations.

This figure shows a rendered three-dimensional EM reconstruction of a reciprocal synapse in the mammalian retina. Rod bipolar cells (RBC,orange) make excitatory, ribbon-type synapses onto A2 (purple) and A17 (red) amacrine cells. A2s relay the rod bipolar signal to the cone pathway, and A17s regulate this process through reciprocal GABAergic synapses back onto the RBC terminal. The three-dimensional reconstructions revealed (right panel) that each A17 synaptic varicosity receives one excitatory synapse (blue sphere) and returns two reciprocal inhibitory synapses (yellow sphere). Work in the lab has shown how the A17 transforms the excitatory input into inhibitory feedback, how hundreds of these individual feedback microcircuits operate independently within a single A17, and how this feedback enhances visual processing in the rod pathway. See Grimes, et al. (2010) Neuron for more details.