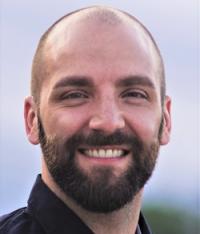 Dr. Kupferschmidt earned his M.A. (2007) and Ph.D. (2012) in Psychology from the University of Toronto, where he studied the neurochemistry of stress and relapse to drug seeking. During his postdoctoral fellowship at the National Institute on Alcohol Abuse and Alcoholism, Dr. Kupferschmidt combined neurophysiology with optical, viral, and transgenic tools to assess synaptic and circuit mechanisms of skill and habit learning.

Dr. Kupferschmidt also established novel approaches to monitor in vivo calcium dynamics in discrete projections from prefrontal and sensorimotor cortices to the striatum to probe real-time circuit function during action learning. Dr. Kupferschmidt joined NINDS in 2017 as the lead scientist in the lab of NIMH Director, Dr. Joshua A. Gordon. In collaboration with Dr. Gordon, Dr. Kupferschmidt guides research into the neural circuit basis of cognitive functions such as working memory, and their dysfunction in mouse models of genetic susceptibility to neuropsychiatric disease, particularly schizophrenia.

Working memory, the storing of behaviorally relevant information on a timescale of seconds, is a central component of cognition. Working memory deficits also feature prominently in many psychiatric disorders, including schizophrenia. Complex networks of neurons across the brain appear to work in concert to support normal working memory. Dysfunction of this cognitive domain in schizophrenia may therefore arise from the widespread neural circuit dysconnectivity observed in patients with, and models relevant to the study of, this disorder. However, the neural computations that give rise to normal and disordered working memory function, and the micro- and macro-circuits of neurons that subserve these computations, are largely unknown.

The Integrative Neuroscience Section (INS) has two principal goals: [1] to probe the neural circuit basis of normal working memory; and [2] to characterize the neural circuit and working memory dysfunction in mouse models of genetic susceptibility to schizophrenia and related disorders to both understand their pathophysiology and identify novel treatment targets. The section uses in vivo electrophysiology and other neural circuit tools (e.g. in vivo fiber photometry, fluorescence imaging) to record the function of discrete cells and circuits in freely moving animals, and uses optogenetic tools to control this function in real-time during behavior. The work focuses on the neural computations within, and circuit-level interactions between, the prefrontal cortex, hippocampus and thalamus. The section also aims to identify molecular targets that influence connectivity within and between these structures, and plasticity mechanisms that may be leveraged to counteract circuit dysconnectivity in psychiatric disease-related models.